It’s STILL a Covid World and we’re just muddlin’ along. 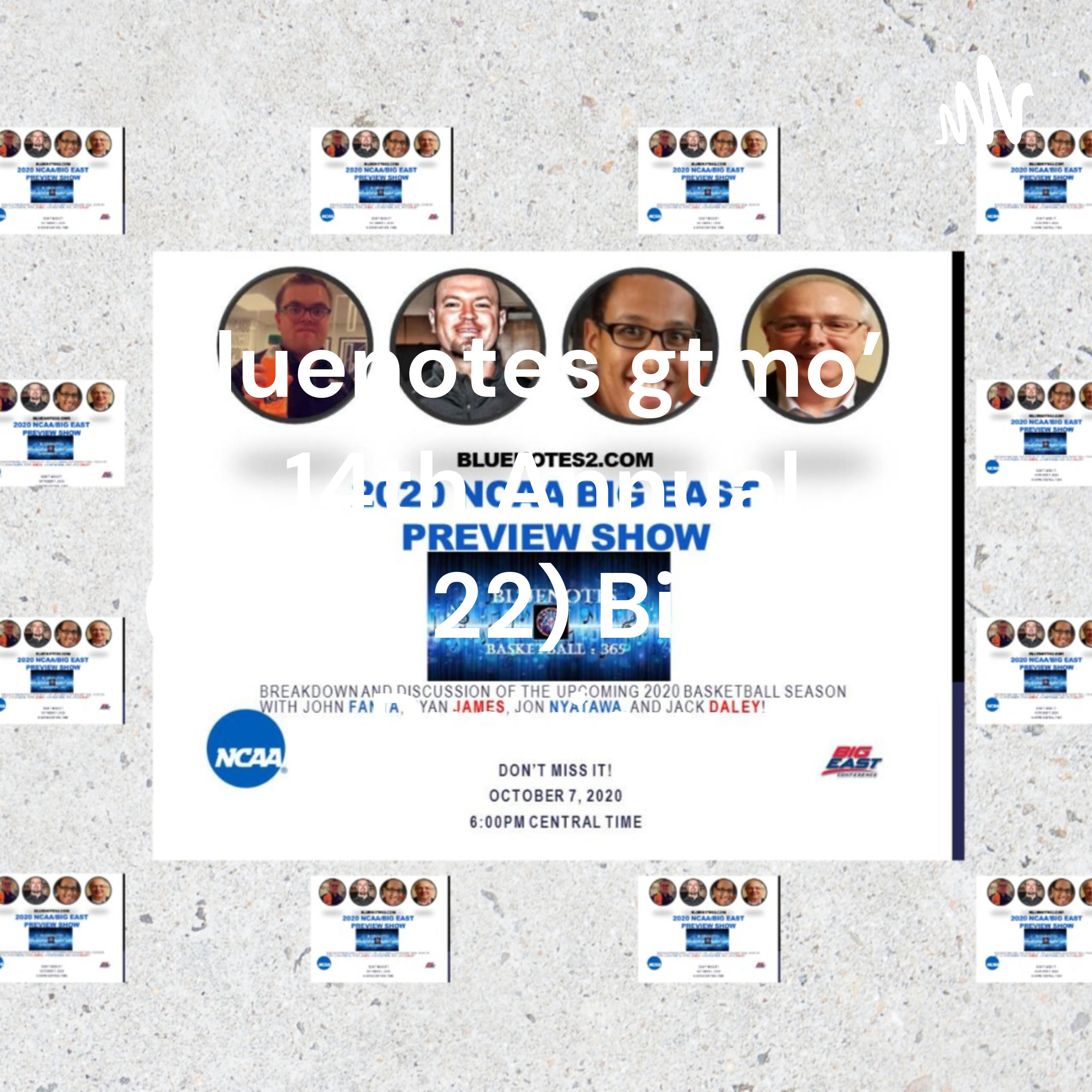 This episode is also available as a blog post: https://bluenotes2.com/2021/09/24/2021-bluenotes-ncaa-basketball-preview/

It’s August 15th Ladies and Gents.  Time for my annual Creighton and Big East predictions.  I’d just like to congratulate you for making it through the pandemic (thus far) and I appreciate your taking the time to visit Bluenotes.

For those of you military folks (CONUS & overseas), govt service personnel, expats, and regular international Jays fans –  I see you in Bahrain, Penang, in da PI, Camp Butler, Singapore, Perth, Kuwait, and Dubai. Hello to all in NDW, WNY, Quantico, Guantanamo Bay, Yorktown, Camp Pendleton, and at 32nd St, in San Diego. Hi to those in Honolulu, Azores, Canary Is., Dijibouti, Kenya, Diego Garcia, Ft Riley, Kunsan, Busan, and other points across the globe. Thanks for checking in and as always Semper Fi! All the Best!

There is a little bit of change coming to Bluenotes in the months ahead.  Attempting to step into the 21st Century a bit more.  Should be a fun move – stay tuned.

It was also no secret the AD Bruce and evidently the CU Administration were happy with winning 20, placing 3rd in the BE, and making the Dance every other year.  However, Bruce Rasmussen is retiring as of tomorrow, 16 August 2021. Everything is great. Lets continue on our winning trajectory. I’m certain the “new guy” AD will be a big hit on campus and within the conference.

Winning and championships are what I am about.  Mac’s/Creighton’s sharing the Big East Regular Season Championship in 2019-20 put a damper on my complaining.  Making a SS this past season (2020-21 Covid Season) also helps. However, the proof is in the pudding, as winning 20 and making the dance are merely two of several annual milestones in determining a successful season.  Creighton winning the Big East championship and single digit season losses need to be done on a more frequent basis than a once every 6-7 years basis (see: Villanova).  I have no desire to become a Seton Hall, Providence, Xavier, Oklahoma, TT, Purdue, Auburn, LSU, or Washington. A school where we “catch fire” every few years and suffer in between. 2020-21 season was good, 22-9/14-6 in a covid shortened year. The Jays made the Sweet Sixteen for the 1st time since 1974. So it was a good year.

Let’s keep the winning trajectory moving ahead. It’s not merely about me, nor about fan expectations – whether 18K in the stands / a few hundred thousand diehards / or millions of johnnie-come-lately fans, nor about coaches or staffs. We are Creighton. We have a legacy to uphold. The Big Guys – Gene, Art, Eddie, Deuce, Red, Eddie Sutton, Tony, and the rest are looking down at us and whether we are abiding by their legacy and traditions. It ain’t about us… It’s about upholding, preserving, and building/improving upon all they have built before us – making Creighton greater.

That synopsis brings us up to today.  It appears that Covid will continue to win over the USA by a large margin.  It’s:  Coronavirus 105 – USA 55.  Communities and politicians are adamant in returning to normal-whatever their local “normal” is. Folks just don’t “get it” in that the pandemic doesn’t give a darn about your feelings of person freedoms, your “right” to do as you please, your individual liberties.  Our collective lack of diligence with regards to following health guidances has put the “return to normalcy” in jeopardy.  Do your part for the greater good for all: Wear a mask, conform with social distancing, frequent hand washing, and get your vaccination(s).

After a shaky late (2020) Olympics in Tokyo, it appears that the sports world has a “to hell with Covid attitude”.

Covid is making good headway everywhere, but on a worldwide basis…it appears the political concensus is full steam ahead-back to so-called ‘normalcy’.

Statistically for the Bluejays, 2020-21 was nearly as bad as 2018…or damned close to it. Overall points, overall shooting percentage, free throws, assists, 3 point percentage were all down. If I were looking at stats alone, one would think it turned out to be a bad year – Covid or not. Last season both Big East Championships were within our reach. We choked! We can do better, and we have in years past. With the uptick in talent we shall do better. I put up the same predictive stats from last year. They are still good numbers to shoot for.

The fellas (pundits) are few and far between this season. Only found 3 sites with sufficient numbers to rank: Busting Brackets, The Athletic, and a partial from ESPN-Lunardi (using his latest early bracket). Katz only has 3 Big East teams in his list- Nova, UConn, St Johns. Rothstein has 4: Nova, UConn, St Johns, and Xavier (in order) in his list.

Busting Brackets- Tristan Freeman has a good list and related article from June. So too does The Athletic- CJ Moore, also from June. Both are even handed in their assessments. Lunardi’s list comes from his latest preseason bracket posting, and only covers the top 6 teams.

Lunardi has 4 BE teams in his latest bracket, with the Johnnies and the Jays in his sets of 4 out. Just his bracket, no writeups.

…and then there’s ol’ git. My prediction is what you’ve come to expect, to know, and to love. Consistency is everything…be who you are.

The Jays are a concensus (3 picks) pick for 6th. Folks above talk about their top recruiting class, then quickly discount that class AND the 2 Grad Transfers CU has picked up. Many of the national pundits cite the old “they’ve lost too much” to be any good, while trumpeting the recruits and transfers of numerous others in the BE and Top 25. I call BS.

2. St. John’s: The Red Storm lost a lot, but it was addition by subtraction. They were a big winner by not losing Julian Champagnie, Posh Alexander, and Addae-Wusu. That’s two major figures in the Big East. They also swiped Rutgers guard Montez Mathis and brought in 3 good newbies and several (6) transfers. Other transfers include Joel Soriano, 6-10 Ctr Esahia Nyiwe, and Aaron Wheeler. The Johnnies were the hottest team in the league over the last month (last 10/7-3; last 12/9-3). Mike Anderson’s crew will be ready to make a run to the top of the Big East.  If I wasn’t a homer, the Johnnies would be my pick to win it.

3. Villanova: A healthy Collin Gillespie gives the Wildcats a chance for a Final Four berth.  That’s what they all say. What the pundits don’t say is that there is blood in the waters. The league caught up with the Cats over the last two seasons, and 3-4 teams could overtake them this year. Yes, the Cats will be good, however, the loss of JRE is HUGE. J. Samuels is a nice player, so is Cosby-Roundtree. Neither gives cause for alarm or fear And both are injury prone. Njoku is at least a year away as an impact player. Nova’s frontcourt weakness will be tested early and often in the non-con. Losing @UCLA, both games in the HoF Tipoff, and @Baylor. UConn and Xavier may have sumthin’ to say about who comes in 2nd and 3rd this season. Experience is great, but not a guarantee- ask Xavier, Prov, Butler, and Seton Hall. Outwardly, all is well. Behind closed doors the faithful of Radnor are concerned that the kingdom is crumbling.

4. UConn: The Huskies won’t have James Bouknight but Dan Hurley has established a consistency that will mean another NCAA bid.  Clearly the Huskies will miss Bouk and clearly they have enough remaining talent to contend for the BE crown. R.J. Cole (12.2 points), Tyrese Martin (10.3), Isaiah Whaley (8), Tyler Polley (7.5) and Adama Sanogo (7.3) lead among returners. Junior Jalen Gaffney and sophomore Andre Jackson figure to be in that mix. And they just added to their sterling class with 4* 6-4 guard Corey Floyd, Jr.

5. Xavier: I had the Muskies 2nd…then bumped up the Johnnies & Jays. I had ’em tied for 3rd with the Cats, then switched them and the Huskies. I am deeply torn by this underachieving Veteran team. Everybody is back. Add 2 frosh in PF Edwards and combo Fwd Eli Tucker. Add 2 transfers in 6-11 Nunge and 6-7 Jerome Hunter. Xavier was a top 25 team last year when the machine was humming smoothly. I don’t think it’s unreasonable to think that could be their ceiling again this year if everybody gets back on the court and pulling in the same direction again this fall. They sucked last season-grossly underwhelmed. Will the real Muskies show up this season or was last year the real Musketeers? The talent is there, can they/will they play together as a team? We shall see.

The top 5 are all NCAA Tourney teams come March. Can we get a 6th? Butler…Butler?

6. Butler: Another veteran team. 8-3 non-con w over Mich St, Loses to UH, OU, and Purdue. Everybody’s back. Great young guards, a boatload of guards/wings we know. A veteran lineup. 0f their 25 games went 8-4Hm/1-9Rd. Beat Johnnies, Nova, CU @Hinkle, but lost to Mr. Magoo on the road. The talent is not overwhelming, but Butler’s system gives them a chance to beat anyone. Transfer Ty Groce, averaged 15.2 points, 6.9 rebounds and two assists last season on 53 percent shooting and could push for a starting spot in the frontcourt. If they come together, get over the road heebie-geebies, and get their monies worth from bigs Golden-Mulloy-Wilmoth, the Dawgs will make tier 2…and Dance.

8. Seton Hall: Returnees Rhoden, Cale, Obiagu, T. Samuels, & injury riddled Bryce Aiken. The pirates landed a good class, but will be leaning heavily on transfers, Jamir Harris, Kadary Richmond (6’6”, 200 lbs.), and Alexis Yetna (6’8”, 225 lbs.). A few have The Hall in the top tier, Lunardi has ’em dancin’. But without Mamu…naw, not having it.

9. Georgetown: Hoyas caught lightning in a bottle for the 2021 BET. Can they do it again? They lost 4 to transfers out and 2 transfers in. Looking at a 7-4 non-con with L’s to San Diego St, S’cuse, Howard, and @South Carolina. Ctr Tre King (E Kentucky) and SG Kaiden Rice (Citadel) are the notable incoming transfers.

11. DePaul : New coach Tony Stubblefield. The coach is known as a great recruiter, so it will be fun to watch him build up his roster.  Returnees include Markese Jacobs (KU-out injured last season), Newcomers are transfers Brandon Johnson (Minn), Tyon Grant-Foster (KU), Jalen Terry (Ore). As the perinneal bottomfeeder DePaul’s fix won’t come overnight. Coach Stubblefield will be building the next couple of years.

With early season struggles by Villanova, we should see UConn and Xavier rise in the early national poll rankings. By mid December both the Johnnies and the Jays will finally enter the fray and get national attention. BEast should keep at least three, probably 4 teams in the rankings. The poll voters will not let go of their favs and that should keep Nova & UConn ranked, with X, Johnnies, and Jays jockeying for position until conference play sorts things out.

The Big East gets 5 NCAA Bids, with 6 a possible longshot.

Busting Brackets has a look at the top Frosh from the top 20 recruiting classes, including several from the Big East.

As for conference honors…

Thanks for stopping by for the 14th edition of git’s Ridiculously Predictable, (not so) Preposterous, Preseason Predictions- 2021/22 Edition. It’s been fun. Hope you enjoyed the ride.