Bluejay Madness!!!
Dancin’ Grandma, Nate Funk, Kyle Korver in the House! The Jay V-ballers best the Braves and AC dunks over a 7-footer!
All this and More during the 3rd Edition of Bluejay Madness!
ESPN was even…in the house. 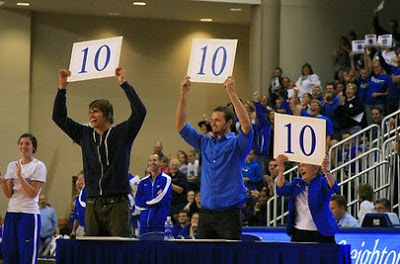 The Jays launched the 2011-12 Basketball Season in grand style, including coverage by ESPN of the 2nd full-fledged Bluejay Madness festivities under the Greg McDermott Era. What a show, What a fun-filled evening. Fans enjoyed the activities and then had a full hour of kibbutzing and autograph seeking afterwards.
Recruit Deontae ‘Teddy’ Hawkins, of Dayton Dunbar HS, Ohio, was also in attendance…word was he was on the same flight as KK during the trip from Chi-town to the “Big O”. Teddy is still in Omaha…no word yet on his committment.
Late Entry (Sunday): According to a fan post at the WBR, other CU recruits were at the event. 2012 SG (Verbal Commit) Isaiah Zierden and family, as well as 2013 Recruit Akoy Agau were both on hand also at Bluejay Madness! Great news…
Late Entry (Sunday): 2012 PF/SF Deontae Teddy Hawkins has changed his Facebook page to reflect CREIGHTON as his new college choice. Noted by (WSU’s) recruiting analyst Tropicalshox. Not confirmed as of yet!
His Rivals profile: http://rivals.yahoo.com/ncaa/basketball/recruiting/player-Deontae-Hawkins-106257
Links:
http://creighton.rivals.com/ BJC Recap n Photos/Vids
http://creighton.rivals.com/content.asp?CID=1279364
http://creighton.rivals.com/content.asp?CID=1279266
http://whiteandbluereview.com/?p=14293 WBR Recap n Photos/Vids
http://www.youtube.com/watch?feature=player_embedded&v=YR7MKywA7AU#t=0s
ESPN coverage
http://www.youtube.com/watch?v=YR7MKywA7AU