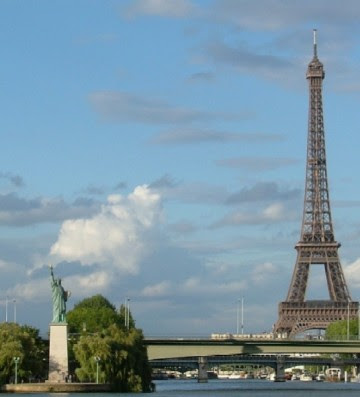 Well, well, well, here we are at the beginning of the 2012 Postseason. The Creighton Bluejays are going Dancin’ this year. It’s about time!

Last year we ‘settled’ for a bid in the CBI. The team won 4 straight home games, including the 1st game of the Best of 3 championship series. We traveled to Oregon and lost the Championship on a heartbreaker. That was then, this is now.

Being gtmo, I am thinking NCAA Championship. Creighton will, in all likelihood, be the best team in their matchups for the 1st 2-3 games in the tournament. 1 or more of our support players will have to step up their games, especially in games 4-6.

Our Mantra for the NCAAs: Win the Weekend! Bring home the Trophy!

I am expecting our guys, our team, the Creighton Bluejays, to Win the National Championships!

Does seeing the Statue of Liberty in Paris seem “Out of Place”? Well, it shouldn’t – there are 2 “Liberty” statues in Paris and only 1 in New York. All 3 were made in Paris and the NYC Liberty was a gift from France.