The 2019 Panam Games Team has been selected.

For the record the 2019 Panam Games USA Basketball team has been selected.  Back in December 2018 USA Basketball and the NCAA selected the Big East to field this years team.  It is the 1st time a single conference has been chosen to represent the USA in the Panam Games.

Providence HC Ed Cooley is the coach of the Panam Games USA team.  He’s had a difficult job as several big stars have graduated or are in the NBA Draft and 5-6 current Big East squads are doing overseas trips this summer, which has depleted the available talent pool from which he can draw his team roster.  Three days ago a complete roster was made public.  It has several surprises in its’ makeup.

The biggest surprise is the selection of a few prior graduates who are Euro pros now.  Tyler Wideman and Geoffrey Groselle both play in Europe, but provide much needed size to this small USA Panam team.

Reaction on the Holyland of Hoops message board was less than ecstatic.  example…

kayako- So we have no real PG, got some much needed size by getting past BE players, and 5 Providence players. I’d have to think Zegarowski and Akinjo weren’t available.

I was personally shocked to see CU’s Ty-Shon Alexander listed, as the Jays have an extended trip to Australia in early to mid August.  I saw a blurb on either GoCreighton.com or the World Herald Jays page stating he would catch up with the team after the Panam Games completed, flying from Peru to Australia.

Generally speaking the USA doesn’t do well in Panam competition, and garnering 3rd place finishes is the best we have mustered in years.  To be fair, most countries are using professional players to make up their teams.  The USA still fields teams with predominantly college level players.* 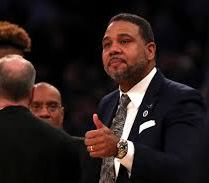 *Correction:  In looking at the Panam Games homepage, I noted that the 2015 Panam Games USA Men’s team consisted of 9 former college and pro players – many of which played overseas – and only 3 college players.  https://www.usab.com/mens/pan-american-games/roster.aspx

The current team information is not yet posted.