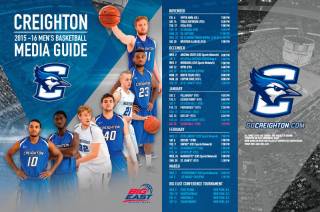 Here’s our 2015-16 Creighton @BluejayMBB media guide cover. You can read the entire guide athttp://ow.ly/T8U00  pic.twitter.com/f52gEe3ZJf
Recruiting:  Some interesting national news, but nuthin’ this week with the Jays.

SKAL LABISSIERE HAS NOT BEEN CLEARED BY THE NCAA

BILL SELF ON CHEICK DIALLO: ‘IT MAY BE A COUPLE OF MORE WEEKS’

http://collegebasketball.nbcsports.com/2015/10/11/syracuse-center-dajuan-coleman-finally-seems-healthy/
Report: Four-star center reclassifying to 2015; down to three

2015-16 Season Note:  Entering the 2nd week of practice… all is well.  IZ and Hegner are back.  No surgery needed for @Swaggy2_ .  WBR is following practices.

Other Notes:  For those new to Creighton, or like me with Alzheimer’s… here are a few of the main line links for the Bluejays.

White and Blue Review…Main news, commentary, and general all things Creighton.  Excellent site and is now the longest running, uninterrupted coverage site.  (Formed 6 or so years ago by merging several Bluejay sites into one partnership or company.)  www.Whiteandbluereview.com .  Also the home of the top Bluejay message board, the Bluejay Underground.  www.bluejayunderground.com .

…others have come and gone, but will update when new sites are announced.