Wednesday – 04 March 2020:  Big slate of Big East games setting up the final Saturday of the regular season.  Creighton dusts off a shorthanded Georgetown team.  Omer Yurtseven and superfrosh Mac McClung were out with injuries.  Jays cruised to a 15 point win, which was not as close as the score indicates.  Jays led by as much as 24 points prior to clearing the bench.  The biggest surprise was a struggling Villanova team, coming off their worst game of the season, in a home loss against Providence, hanging on to upset league leading Seton Hall by 2 points, 79-77.  The wildcats struggled to hit free throws over the last minute, missing 7 of them.

This scenario resets the possibility of either a Seton Hall outright regular season championship – their 1st since the 1992-93 season, or a 2-way title if Creighton wins.  A possible 3-way champion also emerges if Villanova beats Georgetown.  A win would give Creighton a share of its’ 1st BE Regular Season crown.  If Nova shares in it, they would claim their 6th title in 7 years. 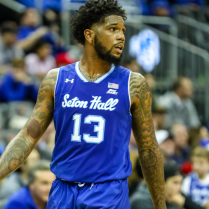 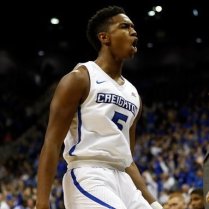 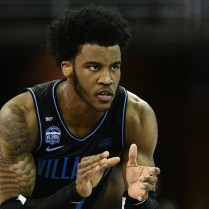 I like the Jays in this scenario.  The team is playing well and has won 9 of their last 10 games.  Creighton is 16-1 at home this season…Jays bear down and claim their 1st Big East Regular Season Championship!

But this isn’t a debate about whether championship-level defense can manifest in the next month. It’s whether Creighton’s winning standards on defense are good enough. The goal, however the Bluejays can achieve it, is to hold opponents to less than one point per possession in a game. That has happened 18 times. They’re 17-1 in those games.  “Our defense, as long as that stays pretty good, we’ll always have a chance to win the game.”

And sometimes all that’s required is touch that’s good and light. As “The Mop” blares through the CHI Health Center Arena loudspeakers 25 minutes before tipoff Wednesday, the Bluejays are bubbling over again, flinging bombs toward the rim from the First National Bank of Omaha logo well beyond the 3-point line and celebrating the makes. Bishop tries a between-the-legs dunk but is rejected by the rim; the sophomore holds his lower back and laughs at his own folly as he shuffles to the rebounding line on the other side of the floor. It’s as if nothing of consequence is going to happen over the next two-plus hours, when in fact there’s an abundance of consequence staring back at Creighton these days.

But then getting this far required a lot of letting go, in every sense. “Don’t even think,” Alexander says, summarizing the basketball Zen underpinning the entire operation. “Just go out and play.”

“We talked about it: We’re at our best when we’re just having fun,” Ballock says. “When we’re loose and having fun, it’s a thing of beauty.”