The Dance begins in Paradise. 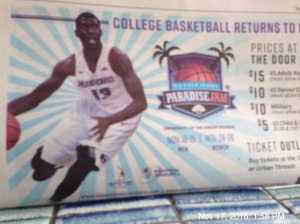 “The dance begins in Paradise.”  This year’s theme at the Paradise Jam is apt for the teams here, as St. Joe’s, North Carolina State, Creighton, and perhaps one or two other participants are candidates for dancing.

An exciting 1st Round as unfortunately all the favorites won.  The three earlier games were competitive but the favorites pulled away late.   St. Joe’s is missing Demery with a stress fx,  plus one other is out .  Kimble is taking up the slack.   Loyola gave them a good test, but Porter’s guys faded late.

In the case of Oral Roberts v Mississippi, ORU gave up a late 5 point lead in the closing minutes and went to OT.  Ole Miss dominated to OT to win by 9.

Montana was outweighed, but not overmatched against NC ST.  Both teams were able to run their stuff and had small leads.  In the 2nd half  NC St began to inch ahead as Montana’s PG lost his cool over a foul call and began to play off the script.  Fortunately, His team continued to work the game plan, but a few turnovers & missed open looks, allowed NC St. to extend its’ lead.  Final margin was nine points.   Kapita didn’t get a travel visa in time, the big Turk is ineligible, and one other fwd is held out on concussion protocols.  State’s style of play is similar to Wisconsin’s.  Slower, work the clock, with a bit of playground hoops mixed in by Abu and the guards.  BJ Anya is heavy, a bit mobile, but he doesn’t move much…once away from the basket he is vulnerable.

So on Sunday St. joe’s will meet Mississippi in the upper bracket of the tourney, while NC State will face the Jays in the bottom bracket.  Two uptempo teams in St. Joe’s and Creighton versus a couple of “use the clock” paced clubs.  Promises to be good entertainment. 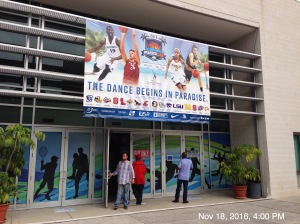