Let’s be clear from the outset.  I’m all for good sportsmanship, losing with grace, being a standup opponent, not crying over bad outcomes, etc., etc.

I understand and accept that generally the Jays and other teams will suffer from “home team calls” on the road, the refs will give the benefit of the doubt to the home team or the ranked team.  FYI, the “Duke Treatment” is attributed to Coach Kevin Willard and ascribes the tendency for referees to give favorable calls and treatment to Duke (or the ranked team) regardless of venue.

But to get homered at home, on our own court, in a very important game no less?  With the win the league race would’ve tightened up, the Jays would’ve moved within 2 games of Villanova, and been back in the Top 25.  As it stands we remain in 3rd but 3 games back of both Nova and Xavier, with 5 games to go…our Jays are now competing to stay 3rd in the race.  Now I picked us 3rd in the preseason, but we were on course to possibly beat that prediction and had a outside shot at tying for the championship.  Well, that’s not to be at this point.

Creighton, down by 2 (68-70) comes down court and missed a layup, Foster rebounded and kicked the ball out to the wing.  Harrell shoots a 3 and is fouled in the process by Xavier’s Bluiett.  Shot misses but Harrell gets and makes all 3 FTs.  Jays lead by 1 (71-70) with 5 seconds (4.6) on the clock.  Time out Creighton.

Now some say the arm contact was minimal and no foul should have been called – game over.  Others say it was a legit call and the right call.

Some say Mac should not have called the timeout, don’t give the opponent an opportunity to set up a play.  Some say it didn’t matter – as X used their last timeout between FTs.  Set up your defense.

4.6 Seconds:  Xavier inbounds to Goodin, who dribbles mostly unbothered downcourt.  He appears off balance and stumbles towards the lane and 2 defenders.  Harrell and Hegner are standing straight up and appear to back up as Goodin is falling and tossing up a prayer shot.  Hegner blocks the shot.

Referee Evon Burroughs (who has quite the history with arguable games versus Creighton) was behind Harrell and Hegner steps into view late and calls a foul on Harrell (although if any contact it was with Hegner) with 0.03 seconds on the clock.

go_jays wrote:The biggest problem I have with Burrough’s call is that he made it from, probably, the worst position on the court relative to the positioning of the other two officials.

While he could see that Harrell was moving his feet slightly during the play, he couldn’t see Goodin plant his forearm into Hegner’s chest. Which, IMO was the reason there was any real contact on the play… and not from Harrell, From the replays,I couldn’t tell for certain whether Harrell actually made any contact with Goodin. But it was very clear that Goodin made contact with Hegner.

From Burrough’s vantage point, he couldn’t see that. Bottom line… the 2 other officials had much better positioning and vantage points… and neither one of them looked to be calling anything. Seems to me that Burrough was prone to making some kind of call… in spite of the fact that he had poor line of sight on that play.

A no call was the correct call as Goodin initiated any contact while off balance-out of control-falling down.

So much for not determining game outcomes.  Goodin gets and makes 2 FTs to win the game for Xavier 72-71.

0.03 Seconds:  Jays hail mary inbounds pass goes out of bounds on the far end of the court. Xavier inbounds.

Let’s be clear, I’m all for good sportsmanship, losing with grace, being a standup opponent, not crying over bad outcomes, etc., etc.

Where was the benefit of the doubt for the home team?  The ranked team got the “Duke Treatment” and the home team got homered at home, on our own court, in a very important league game.  Life in the Big City. 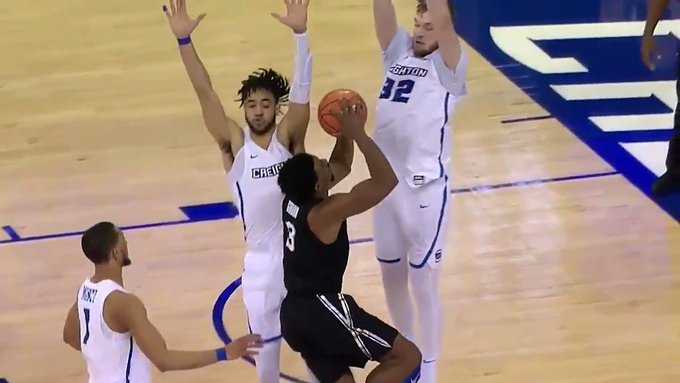 Foul or no foul? That is the question…