Spring has sprung and college basketball recruiting has never let a little thing like weather get in it’s way.  Recruiting is in full swing.

The Jays are still beating the bushes in the transfer market – as expected being Transfer U – looking at several graduate and regular transfers to augment the roster.  We lost 4 seniors to graduation and Khyri is a possible 1st rounder in the NBA Draft (mid teens to high 20’s).  Mr. Thomas has declared, but no agent as of yet.  I fully expect Khyri to turn pro as his stock will probably not get higher with a senior year campaign.

The Jays are looking at several graduate transfers:  Matt Mooney (SDSU), Brock Stull, (UWM), among others.  Mooney has visited the Hilltop, but no word yet on a decision.  Mooney is down to TT, NW, and Creighton.  No visit yet for Stull although CU is listed in his Top 5.  It should be noted that Stull is very familiar with former UWM coaches now at Minnesota and Butler.  Stull is visiting UMinn.  Cremo committed to Villanova.

CU getting in on Isabell.

Appreciate all the schools recruiting Denzel Mahoney at the present time. However, Denzel is down to his top 4 schools Creighton, Ole Miss, Georgia and Virginia Tech.

Mahoney has set up visits to Creighton and Ole Miss according to his AAU coaches.

The Jays are looking to land at least 2 transfers. 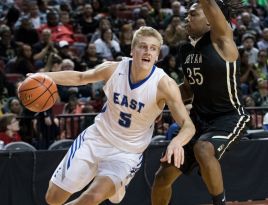 More to come as the scenario unfolds.  All of our 3 (PG, Wing fwd, and Ctr) previous commits are signed and should be on Campus come June.  Check in with both  https://creighton.forums.rivals.com and http://bluejayunderground.com to keep up with the latest recruiting news.   gtmoBlue