Ty-Shon Enters the NBA Draft according to plan: Gotta go now and beat the crush in 2021.

There are basketball purists, coaches, team-builders, player developers, and planners in Charlotte, NC.  Many of the most knowledgable people in basketball call North Carolina home.  The Alexanders and Dotsons are amongst the local basketball elite in the area, and they have a master plan.  It’s business.  Not judging…it is what it is.

The short and sweet of it is:  Their sons are elite players who have been groomed since puberty (or earlier) for the game. Get them into Division 1 play for 2-3 years and on to the NBA.  The NBA threw a wrench into the mix when it decided to open up the NBA to high schoolers beginning in the 2021 NBA Draft.  There will be a flood of high schoolers entering that 2021 draft.  That means that it’s now or never for older players in colleges across the USA.   It’s a business decision, pure and simple.

So after caucusing with family, friends, & supporters, Ty-Shon (21 y/o) today announced he is entering the 2020 NBA Draft.  PG Devon Dotson (20 y/o) (Kansas) should soon follow suit – as is the plan.  Good luck to you both. 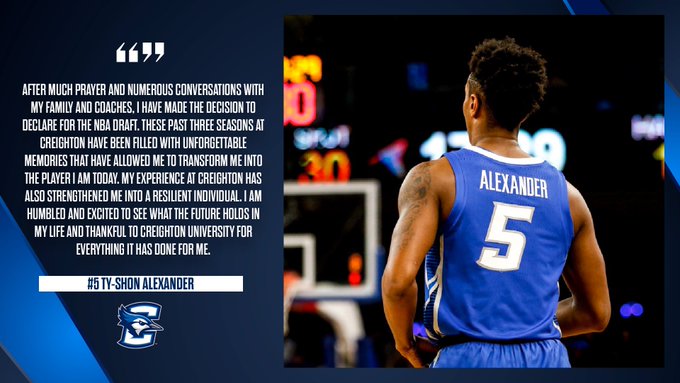 Creighton guard Ty-Shon Alexander (16.9 ppg) expected to declare for the NBA Draft & barring a change of heart, his intention is to remain in the draft and bypass his senior season, NBA source told

As for our Jays?  Creighton will be fine.  We will drop out of the top 5 in polls, but remain in the top 6-12 range.
Our Jays have an overabundance of talent currently on this team.  We’ve come a long ways, baby!  DENZEL, Mitch, DJ, Z, and Chris will take up the slack.  Shereef and Jett are still here.  A healthy Jacob returns and AJ, Ryan, AOC, and Sami join the fray.  Plus we now have room for Kerwin, DJ Carton, and Batcho to come aboard.  All is well on the Hilltop.  Roll damn Jays!
Ty-Shon, good luck and Godspeed.  You will be missed.  Once a Jay  –  Always a Jay!